Lucerne – The city in the middle of Switzerland, right on Lake Lucerne surrounded by snow-capped mountains. Numerous ski resorts are within 30-60 minutes of Lucerne. The city itself is located directly on Lake Lucerne and a river, the Reuss, which divides the city into two parts. 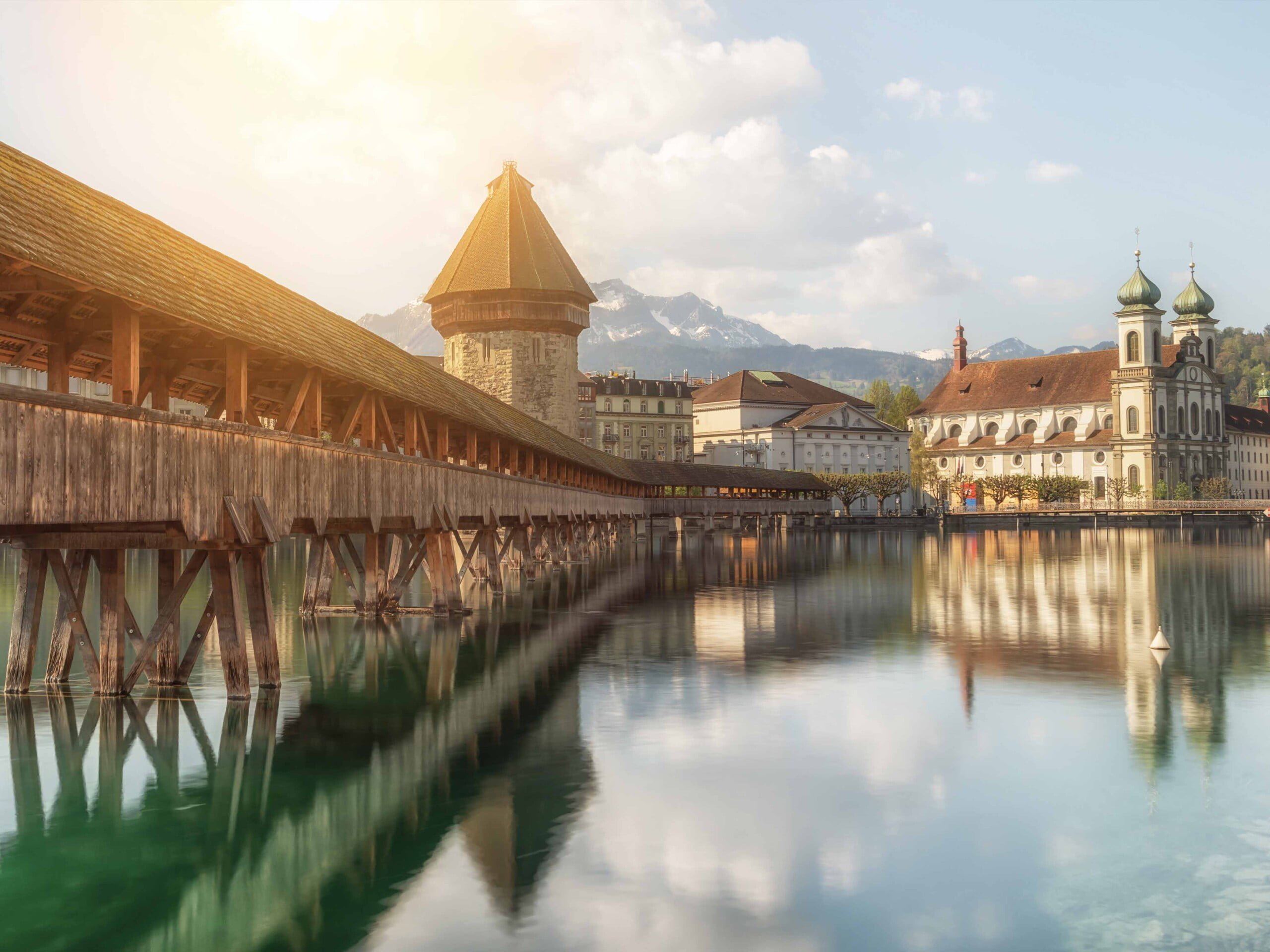 Numerous bridges connect the two parts of Lucerne. Among them is the Chapel Bridge, which was already built in the Middle Ages, in the 14th century. It is the oldest and also the second longest covered wooden bridge in Europe. It is one of the most significant attractions and a landmark of Lucerne. However, before the Chapel Bridge, another covered wooden bridge was already built to connect the two parts of Lucerne, the former Court Bridge (“Hofbrücke”). It is also called “Lange Brücke” (long bridge, originally 385 m long) or “the disappeared one”, as it no longer exists today. The third in the group is the Chaff Bridge (“Spreuerbrücke”). Change banks in Lucerne and cross the Reuss River by walking across these bridges, under the wooden roofs adorned with numerous unique paintings. Also, go on a historical trail – not only along the Lucerne bridges, but also along the numerous historical towers; watchtowers, clock towers and along the historic city walls of Lucerne.

Lucerne is also a paradise for golfers. The Lucerne Golf Club was built in 1903 on the Sonnenberg and is described as “romantic, picturesque and unique”. No wonder – on green meadows in the middle of a mountain scenery the clubs are swung here. The latter is also the case at the Meggen Golf Course. Meggen is a municipality that belongs to the district of Lucerne and is located less than 10 minutes from the city center. The view is breathtaking: lake and mountains, traditional Swiss farmhouses; also recommended for hikers or walkers. A hiking trail runs right through the middle of the golf course. Awarded the Swiss Golf Award 2018 for Best 9-hole Golf course, the grounds also feature the Gasthaus Badhof – Golfhotel, honored as one of Lucerne’s Top 50 Hotels. Wine is grown on the edge of the golf course, at the Sitenrain organic winery – local and organic. The wine can be purchased here directly from the farm.
On the other side of the lake is Bürgenstock Alpine Golf, the golf course belonging to Bürgenstock Resorts. But we’ll tell you more about the resort, located in the mountains with a phenomenal view of Lake Lucern, elsewhere. 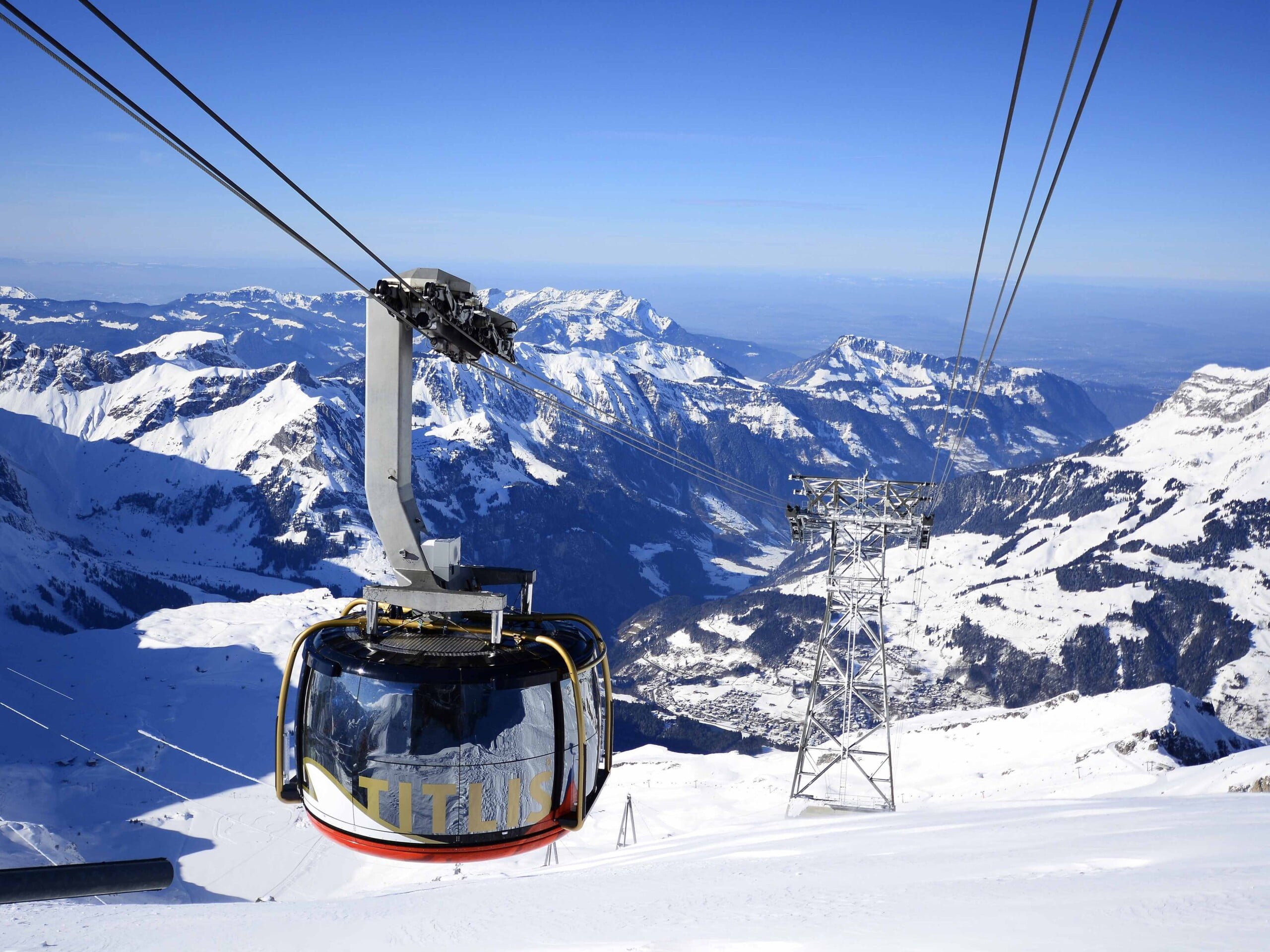 Ski resorts in the surrounding area include Andermatt, the largest ski area in central Switzerland with 180 kilometers of slopes and mountains up to 3,000 meters high. A ski area that offers a beautiful mountain panorama. About the little town from which the ski area takes its name, Johann Wolfgang von Goethe, Germany’s national poet, once said: “To me this is the loveliest and most fascinating of regions.” Another of these ski areas is Hasliberg (where Hasli is the Swiss word for hare), with 60 kilometers of slopes and 25 km of winter hiking trails, or the Engelberg ski area. Here skiing is possible from October to May. The ski resort Engelberg includes the 3238 meters high mountain Titlis, whose summit region is covered by a glacier. You can also find here the world’s first rotating cable car. The ascent and the view is worth a visit even for non-winter sports enthusiasts.

Sils im Engadin in Switzerland. In no other village did the paths of great poets and thinkers cross as often... read more

We use cookies to ensure that we give you the best experience on our website. If you continue to use this site we will assume that you are happy with it.OkNoPrivacy policy