Surf and Turf Burger: a burger that combines seafood and steak with a mix of delicious, juicy vegetables and homemade sauces.

What is a surf and turf burger?

Generally, Surf and Turf is a combination of red meat and shellfish from the sea. For example, just steak and lobster – as a combination of the two most expensive dishes on the menu. Because of this, the trend was still doubted by critics in its early days. It has been around since the 1960s and originated on the Atlantic coast of North America.
But it doesn’t always have to be lobster. Crayfish can also be found on the steak, or you can use shrimp, as in our Surf and Turf Burger. We find the combination of juicy steak with the sweet meat of fresh shellfish very tasty.

Worth the effort: homemade buns and sauces

Also important for good burgers are homemade burger buns. Not to be compared with the soggy soft burger buns of the fast food chains. It is also worth making the sauces yourself. We use a BBQ sauce and garlic mayonnaise for our surf and turf burger. We guarantee you, no store-bought mayonnaise is as good as a homemade mayonnaise! Add fresh potato wedges or homemade oven fries and you have a delicious meal.

The right meat for these surf and turf burger

The beef you use doesn’t have to be the tenderloin. What’s important is that it’s tender enough to bite it easily (since you’re supposed to eat your surf and turf burger with your hands). Small anecdote at this point: when we tried the recipe for you, one of the people eating with us actually ate his burger with a knife and fork. However, not because the meat was not tender enough, but because not everyone likes to eat with their fingers. But this is what we have the Vollkommen FVR Zeitlos Steak Knife for 🙂

Also make sure that the meat is not cut too thick. We pointed this out to our butcher and it had just the right thickness. Otherwise, the burger will be too high later and biting off will be difficult. Accordingly, the beef should then be grilled but also only briefly, so that it is not completely through, we prefer medium for our surf and turf burger (but of course that is also dependent on personal preference).

Wash and pat dry the beef tenderloin and shrimp. Either sear the meat in olive oil and a frying pan for 2 minutes on each side or - and this is our preferred version in terms of taste - grill the meat. Season with salt and pepper.

Cut the rolls in half and place on a baking sheet with the meat. Turn of the oven and let the meat rest in there, together with the bread to get it toasted.

Then fry the shrimp in the same pan for about 3 minutes and season with salt to taste. 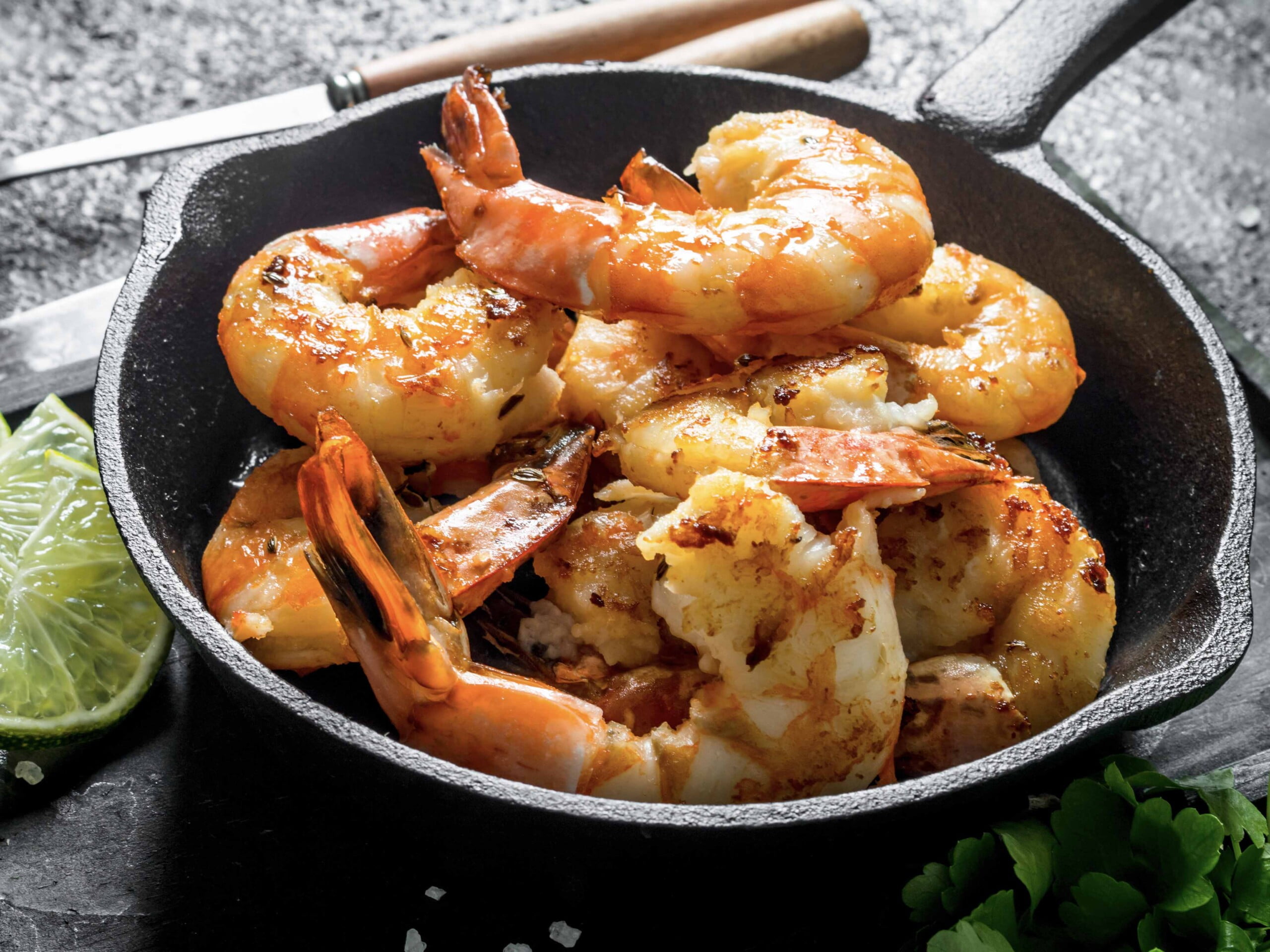 Heat the collected tomato oil in a large frying pan. Add the peppers, snow peas, garlic and onions and sauté for about 3 minutes. Add the tomato strips and season with salt and pepper.

Top the burger buns with the ingredients. For a nice effect, you can also put a shrimp on a skewer for garnish and thus drape on the burger. 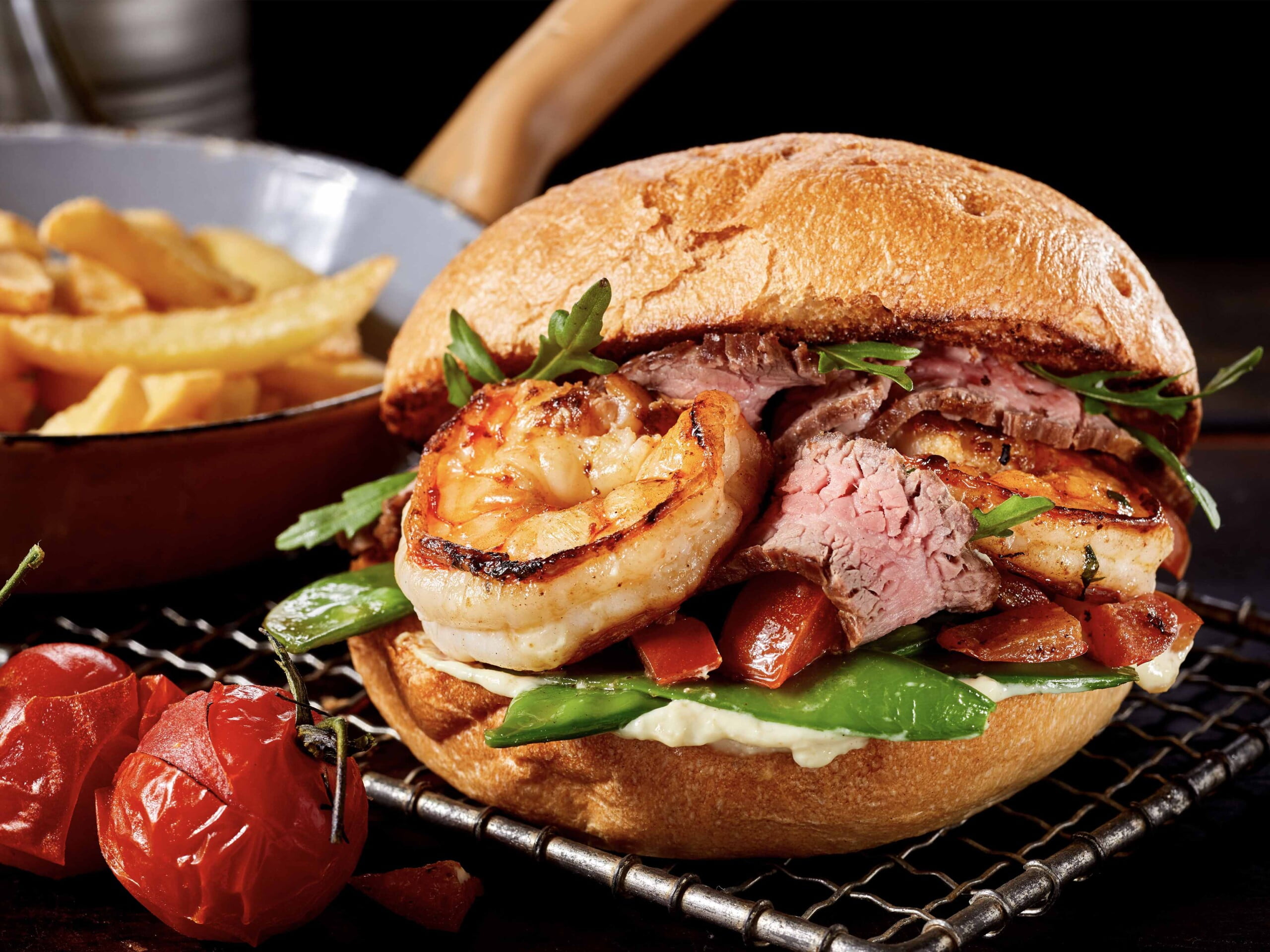 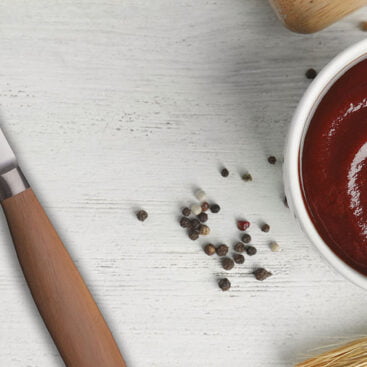 Homemade Barbecue Sauce American
We use cookies to ensure that we give you the best experience on our website. If you continue to use this site we will assume that you are happy with it.OkNoPrivacy policy